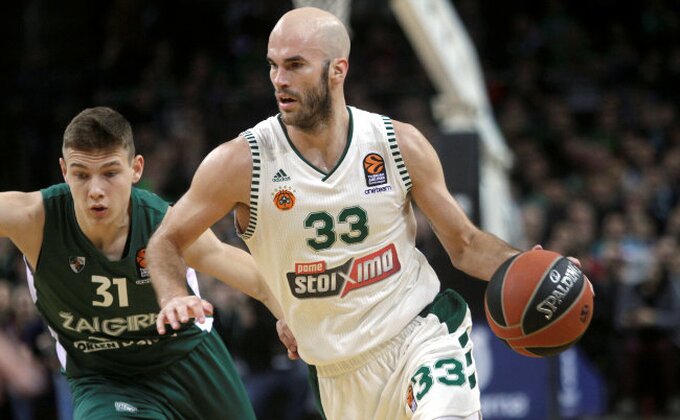 Withdrawal from games against Panathinaikos and relegation from the first division (2019)
The 2018–19 season was the most turbulent in Olympiacos and Greek basketball history. It was the season that the ongoing feud between Olympiacos and Panathinaikos peaked, following Olympiacos decisions after their long-lasting protests for the relationship of the Hellenic Basketball Federation with Panathinaikos, the officiating in the games between the two arch-rivals and the exclusion of EuroLeague referees from national competitions.[23]

Initially, in the 2018–19 Greek Cup semifinal against Panathinaikos, Olympiacos decided to withdraw and to not return for the second half of the game in protest for the referees decisions, despite the possible sanctions for the team for leaving the game.[24] This led Panathinaikos' owner, Dimitrios Giannakopoulos, to indecent acts, leaving a red woman's underwear on the empty Olympiacos bench, and dismissive statements against Olympiacos' owners Giorgos Angelopoulos and Panagiotis Angelopoulos.[25] In the following day, Olympiacos announced that they would not play again any league or cup game against Panathinaikos, unless it was officiated exclusively by foreign referees, as well as any national competition game against any opponent, if any of the forementioned Cup semifinal's referees (Anastopoulos, Manos and Panagiotou) was set to officiate; furthermore, Giannakopoulos was not anymore allowed to enter the Peace and Friendship Stadium under any capacity he might be using, also asking from the authorities to investigate the extremely low betting odds for Panathinaikos to win the Cup semifinal, after the referees' names were announced.[26][27] At first, Olympiacos was punished with a deduction of 6 points from the same year's league table.[28]

Olympiacos announced that their decisions were fully supported by the parent club's Olympiacos CFP chairman, Michalis Kountouris.[29] As the time for the game of the 2018–19 Greek League's second round was approaching, Olympiacos officially informed the Hellenic Basketball Federation that they insist on their position not to play any game officiated by the three forementioned referees, or any game against Panathinaikos that will not be officiated by foreign referees.[30] Previously, Panathinaikos had expressed their opposition to the demand of the Reds.[31] After the announcement of the Greek referees who were going to officiate the forthcoming derby, Olympiacos announced that they would not participate in the game,[32][33] and even a last minute meeting under the Greek Deputy Minister for Sports ended with a quarrelling between the people of the two clubs and with Panathinaikos' owner Giannakopoulos cursing Olympiacos' owners and chanting about the forthcoming relegation of his club's eternal enemy.[34]

For the last matchday of the league's regular season, the central refereeing committee announced that Anastopoulos, one of the three referees of the much discussed Cup semifinal, was drawn to officiate Olympiacos' home game against Promitheas Patras, after Giannakopoulos pressure for the three referees to be included in the draw for the Reds game. That meant that if Olympiacos insisted on their position not to take part in a game officiated by Anastopoulos, Manos and Panagiotou, then the red giant would be relegated to the second division, a penalty for any team that forfeits two league games.[38] Finally, Anastopoulos was replaced after his request not to officiate the game, which took place regularly,[39] something that led Panathinaikos to protest with their withdrawal from their last regular season game against Kymi, which was awarded the win and escaped relegation, while the Greens were punished with a 6-point deduction.[40][41] Meanwhile, Anastopoulos house was reportedly attacked by strangers,[42] which were proved to be Olympiacos fans.[43]

In the final standings of the regular season, Panathinaikos with −6 points and Olympiacos with −8 points, and one more point not awarded to each one, were ranked in the 3rd and 6th place respectively despite having the two best records, which meant that they were to play against each other in the first playoffs round.[44] However, Olympiacos proceeded to legal action, asking from the high council for the solution of athletic disputes to void the last matchday of the regular season, pointing out that all referees assignments were illegal, thus the playoffs were postponed for one week.[44][45][46] The Hellenic Basketball Clubs Association decided to confirm the final standings,[44] with Olympiacos talking about violation of the sporting legislation.[47][48]

Olympiacos announced that they would not compete in the playoffs against Panathinaikos, since not only were foreign referees not appointed, but also two of the Cup semifinal referees (Anastopoulos and Manos) were drawn to officiate the first playoffs derby.[49] In the face of this possibility EuroLeague Basketball president, Jordi Bertomeu, accused the Hellenic Basketball Federation of not intervening to resolve the dispute between Olympiacos and Panathinaikos, describing the situation of the Greek basketball and the forthcoming relegation of Olympiacos as unthinkable.[50] Olympiacos, finally, did not appear in the first playoffs game at Panathinaikos home arena, which meant that the Reds would get relegated to the second division for forfeiting two league games,[51][52] while shameful incidents occurred once more in Panathinaikos court, where a chicken was laid out on Olympiacos bench.[53] Later, the Hellenic Basketball Clubs Association officially announced the relegation of Olympiacos to the Greek A2 Basket League, due to the non-participation in a league playoffs game; Olympiacos were eliminated for the rest of the playoffs and were also placed at the bottom of the final standings, with all their results voided and non-replaceable.[54]

The club's former coach, Ioannis Sfairopoulos, stated that Olympiacos chose the extreme way to change a situation that existed for years, something they tried to do in various ways in the past but nothing worked,[55] and that they have to change the status in Greek basketball.[56] Panathinaikos' coach, Rick Pitino, stated that Greek basketball needs Olympiacos and asked from them to change their mind.[57] Hellenic Basketball Federation's president, George Vassilakopoulos, after his long-lasting silence, stated: "It will be a disaster for basketball, for such a great club with a history like Olympiacos to play in the second division and a solution must be reached fast. I’m clear about this". Newly appointed Greek Deputy Minister for Sports, Lefteris Avgenakis, and Vassilakopoulos, both agreed that Olympiacos should be part of the Greek Basket League and that a solution should be found,[58] while his predecessor, Giorgos Vasiliadis, also accused of his passive stance, revealed that he had requested FIBA to send foreign referees to the league games.[59] However, no action was taken maybe due to Panathinaikos constant threats that they would witdraw from the league, if Olympiacos remained in the first division.[60][61] In the meantime, Olympiacos appeals about the league last matchday's legality were rejected,[62] and they decided to take the Hellenic Basketball Clubs Association to the sports court.[63]

Finally, Olympiacos announced that they decided to register an entirely separate squad for the 2019–20 Greek second division and 2019–20 Greek Cup, for reasons of legality, and that squad would be a secondary "B" team, with a different name (Olympiacos B Development Team) and using the Peace and Friendship Stadium's practice court as their home arena, with the senior team playing exclusively in EuroLeague, which "has all the elements that characterize a serious, modern and reliable league", according to their announcement.[64] After losing the first EuroLeague game of the season against ASVEL, Olympiacos and David Blatt parted ways.[65] His assistant Kęstutis Kemzūra became the head coach of the team until the end of the season.[66]